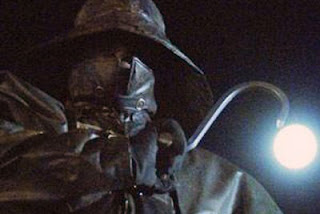 Halloween is fast approaching, so we thought we’d have some fun by adding a new twist to an old urban legend!
The Hook of RV Country
A teenage boy drove his date in his fathers brand new A.C.E. motorhome to a dark and deserted Lovers‘ Lane for a make-out session. After turning on 98.9 on the touch screen LCD radio for mood music, he leaned over and began kissing the girl. The A.C.E. was spacious and cozy and the two quickly felt at ease.
A short while later, the music suddenly stopped and an announcer’s voice came on, warning in an urgent tone that a convicted murderer had just escaped from the state insane asylum — which happened to be located not far from Lovers’ Lane — and that anyone who noticed a strange man lurking about with a hook in place of his right hand should immediately report his whereabouts to the Fresno police.
The girl became frightened and asked to be taken home. The boy, feeling bold, locked all the doors of the A.C.E. instead and, assuring his date they would be safe, attempted to kiss her again. She became frantic and pushed him away, insisting that they leave. Relenting, the boy peevishly jerked the RV into gear drove the girl home passing his place of employment on the way –Paul Evert’s  RV Country.
When they arrived at the girl’s house she got out of the RV, and, reaching to close the door, began to scream uncontrollably. The boy ran to her side to see what was wrong and there, dangling from the door of the A.C.E. motorhome handle, was a bloody hook.
We hope everyone has a fun and safe Halloween! Remember to share your pictures on our Facebook wall!